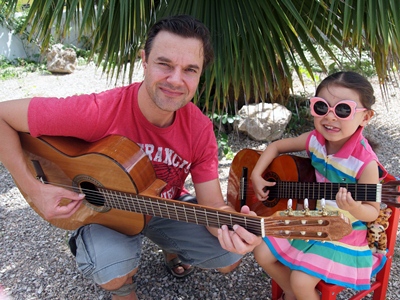 Elger Verschuur began his guitar study at age eight and his violin study the year after, at the Amsterdam music school.

Five years later he made his first appearance on radio where he performed the works of E. Granados and Mendelssohn, among others.

He also obtained his Teaching Musician, Violin certificate in 1996.

Elger underwent his classical guitar studies under the watchful eyes of Frans van Gurp, Lydia Kennedy in Hilversum and Lex Eisenhardt in Amsterdam.

His violin studies took place with L. Somlai and D. Otten in Hilversum.

Elger has participated in various national and international contests, with the highlight being a place in the finals of the First Dutch Guitar prize in Amsterdam (1992), held in the Amsterdam Concertgebouw. Thanks to this contest, Elger performed in Han Reiziger’s radio programme.

He was the first classical guitarist who held a concert for The Classical Music board Bonaire.

He additionally held concerts on Aruba and Curacao.

Elger, alongside his trusted violin, has experienced various tours in Spain, Portugal, Vienna and Belgium, during his time spent with the National Youth Orchestra. He has undergone master classes with renowned classical guitarists such as V. Mikulka, R. Aussel, R. Dyens and the Groningen Guitar Duo.

Elger has been teaching both children, adolescents and adults for over 25 years.

He was additionally employed as guitar and violin teacher by the renowned music schools “De Gitaarkelder” in Spakenburg and the “International Music School Eddy v.d. Heuvel” in Hoofddorp.

In the period of 2011-2014, Elger successfully ran his own music school on Bonaire.